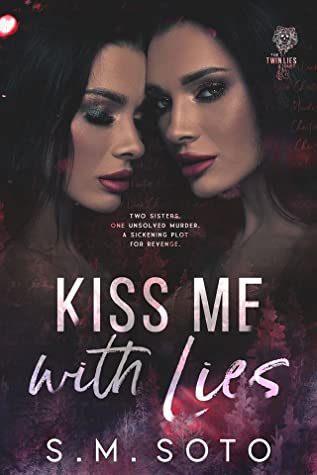 Kiss Me With Lies by S.M. Soto

⭐Must Read⭐
⭐Highly Recommended⭐
🔥What you will find…

Ever since I read the blurb it intrigued me and when I see the mind blowing video teaser it intensify it even more. I knew that I have to read this book. And it didn’t disappoint me at all. Damn! what a gritty, gripping and engrossing Book was this. Guaranteed page turning book that keep you glued to every chapter till end.

A gruesome crime that took place years ago changed Mackenzie life completely. My heart laterally bleed for her , for what she endured she has almost lost everything. Death of her sister became a chronic wound on her soul that couldn’t be cured until she found justice for her sister. She was beyond broken but obsessed and determined to solve the mystery of Madison death and for that she will go any length to prove what she was telling the whole time. Whether She had to put her heart,soul and even life on stake.

The book got me by the ball from the prologue, all the Characters were very interesting and intriguing. Especially BAZ and Mackenzie character were so strong, there was very intense chemistry between them which was palpable through out the book. And the rest of the boys all have similar qualities and habits. They all were filthy rich, intimidating and formidable. By look they all were hot and handsome and they have eligible playboy persona. Even though they were handsome but there was some sinister aura around them. They way S.M. Soto depicted them made me hate them worse.
Like Mack I have doubted all of them But the twist at the end shaken me to death. I didn’t expected that, It’s was unbelievably twisted and fucked up. I don’t do good when story end on cliff hanger. I love you S.M.Soto but SORRY right now I hate you for that bcoz I wanted the book keep going until I got my all answers . Regardless of that Hats off to you for this incredible book . You did an outstanding job

P.s though I loved the book but there were things that bother me through out the book that mack recognised them all after years but the savages/ boy how come they couldn’t recognise her but that thing soto clear at the end of the book that they were making her fool by not recognising her. 2nd Mackenzie childhood friend Winne she was disappeared like she never existed author only mention her in prologue but after that nada I can only guess probably author left her part to be mentioned in 2nd book.

Overall I thoroughly enjoyed the book. I will definitely recommend this to all my book fellows.

Two sisters. One unsolved murder. A sickening plot for revenge.

When Mackenzie Wright attends her first real high school party, held somewhere deep in the woods of her small California town, no one expects to wake up the next morning to news of a gruesome murder. Especially not her own sister’s.

No suspects.
No motive.
No convictions.
Just one unsolved murder and whatever’s left of the now deserted town.

Mackenzie has spent years with her sister’s death weighing heavily on her shoulders, but it isn’t until she stumbles across a photograph that changes everything for her. The memories, everything from that night, come flashing back in high-speed technicolor and Mackenzie soon finds herself obsessed with the truth.

Determined to find out what really happened to her sister, Mackenzie relies on that one photograph to give her the answers she needs by embedding herself into the lives of five of the wealthiest men in Los Angeles. Consumed by her need for revenge, Mackenzie infiltrates the world of the rich and elite, only to come face-to-face with an alluring complication in the form an elusive playboy.

When enemy lines are drawn, Mackenzie has to choose between her loyalty to her sister and the man who has stolen her heart.

S.M. Soto was born and raised in Northern, California where she currently resides with her son. Her love for reading began when she was a young girl, and has only continued to grow into adulthood. S.M. lives for reading books in the romance genre and writing novels with relatable characters. She refers to herself as a bit of a romance junkie. S.M. loves to connect with readers and eat copious of donuts that will surely lead to her demise.